DVDVideoSoft
Download for Windows
How to convert video to MP4
We use cookies to analyze our website traffic. By continuing to use the site, you agree to our Privacy Policy
OK
DVDVideoSoft
US
News Support Apps
Free Video Converter
English (US)
English (UK)
Deutsch
Français
Italiano
Español
Português (PT)
Русский

Convert any video files to MP4, MP3, AVI, MOV, MPEG to playback on your multimedia device.

This Free Video Converter is a superb app for Windows to convert videos between lots of formats.
Plain and simple, yet complete!

Download the best video converter of the year 2020 that saves your time. 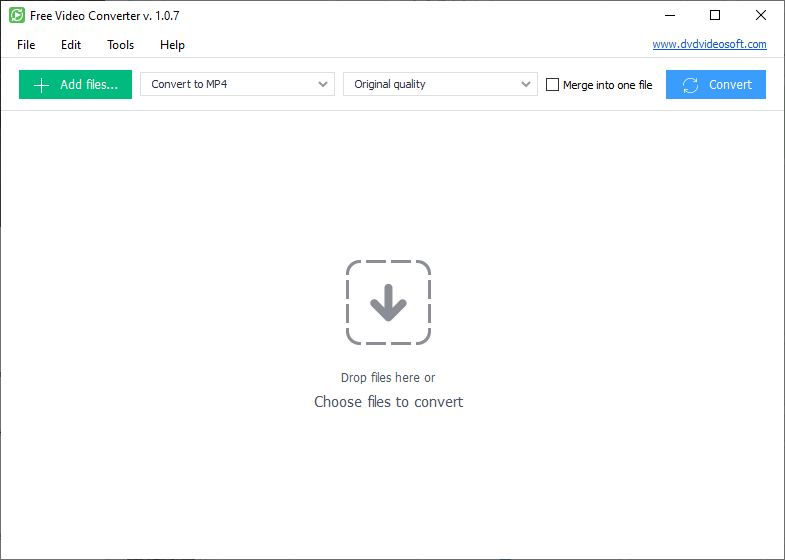 “DVDVideoSoft is known for its superb free media software that performs exactly as advertised, and Free Video Converter is no exception. Its interface is clean and uncluttered, and it can convert batches of videos with ease.”

What is a video converter?

Now it is an app that transcodes or in other words converts one video format to another. And there are a lot of video formats.

But we may say that MP4 is the most popular video format today. Free Video Converter by DVDVideoSoft is aimed to convert video files to any format compatible with popular multimedia devices. So, if you come across with a rare, that isn't recognized by your iPad, or Xbox One, transform it to the most commonly used. This Video Converter creates video files for any modern device, like Apple iPad or iPhone, Samsung phones and tablets, Amazone Kindle, Android and others.

Why may you need to convert videos from one format to another?

This is usually done in cases where a target device does not support the format or has limited storage capacity that mandates a reduced file size or to convert incompatible or obsolete data to a better-supported or modern format.

If you seek for compatibility with obsolete devices convert MP4 to AVI or MPEG4.

How to convert video or how to change video format to MP4?

The DVDVideoSoft team designed simple and self-explaining interface to convert videos between lots of formats and change video quality to fit the storage space of any device. To convert videos or change a format to MP4 you need to make just three steps.

Comparison of video converters on Wikipedia.

Cross-platform, open-source and free solution to record, convert and stream audio and video

The best free video converter 2020 according to techradar